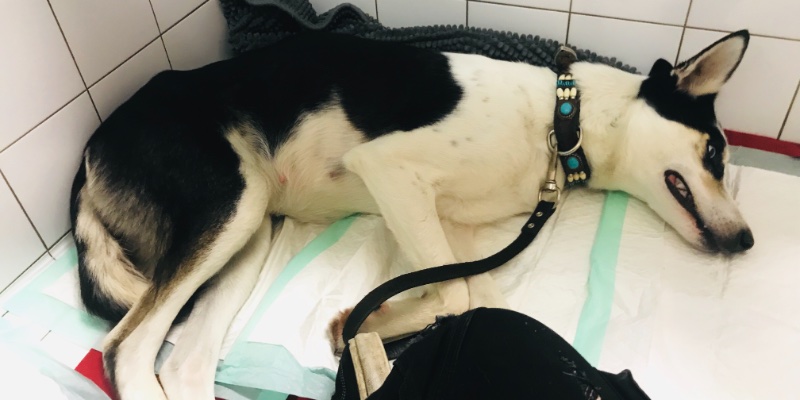 *EDIT: please ask first if you don’t understand something before making conclusions. Thanks! :)

Gaia, my blue eyed sweetheart, had an accident with another dog 10 weeks ago. Because I didn’t had the best living situation (no home) for myself that time I really hoped she didn’t got pregnant. We asked different vets what we could do to stop the pregnancy, but that didn’t work out.

The weeks past by and she only got skinnier instead of thicker. A couple of weeks ago I noticed some changes in her behaviour and body, but she still looked like a skimpy dingo. Too skinny to have puppies in her belly.

Almost 2 weeks ago Gaia suddenly acted very restless. I already felt that something was about to happen. I went to the vet and they told me she was going into labour and that I had to go home and give her a quiet space where she could give birth peacefully. I was on a visit not anywhere near my place... also, the puppy was a week early.

I had to do what the best thing was that moment and that was to create a space at the place I was staying. We waited hours and hours and nothing happened. Gaia was in pain and we weren’t sure what to do because different vets we called gave different advices.

Final position was that there could be some complications and that the puppy’s could already have died in her belly.

I called the animal ambulance and they picked me up in the evening and brought me to the only vet in the city who made some space for us. They tried to arouse the process with some shots but it didn’t work. After 2 hours of sitting and crying with her in a cage while I gave her all the love and belly rubs she deserved and we waited for something to happen, they made the decision to start the surgery. She was getting a cesarean section.

It was very emotional because the chance of a happy end wasn’t that big..

I got called the same night and they told me 1 beautiful, big, healthy puppy was born and the mother and puppy were doing fine. How amazing!

She and the pup had to stay for the night and I could pick them up the next day.

I knew this would be something expensive, but the bill I had to pay was much more I expected. I couldn’t pay it myself and had to ask for help to my sweet stepfather who got me out of that situation when I had to pay the bill.

Now I hope that I maybe could raise some money via this way because times are tough to get it all back on track and give the puppy a nice start of her life.

The goal is to raise the surgery costs, but I know that that’s much to ask. If you could miss a few bucks and want to support us, feel free to donate! Any donation is really appreciated.

I just thought I could try something like this. You never know how it might work out.

Thanks all for reading. ðŸ™